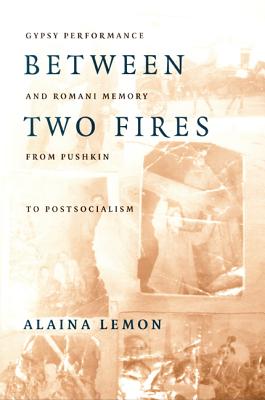 A first edition. Book is clean and tight. Has minor shelf wear. We put tracking on every shipment.

Since tsarist times, Roma in Russia have been portrayed as both rebellious outlaws and free-spirited songbirds--in each case, as if isolated from society. In Soviet times, Russians continued to harbor these two, only seemingly opposed, views of "Gypsies," exalting their songs on stage but scorning them on the streets as liars and cheats. Alaina Lemon's "Between Two Fires" examines how Roma themselves have negotiated these dual images in everyday interactions and in stage performances.
Lemon's ethnographic study is based on extensive fieldwork in 1990s Russia and focuses on Moscow Romani Theater actors as well as Romani traders and metalworkers. Drawing from interviews with Roma and Russians, observations of performances, and conversations, as well as archives, literary texts, and media, Lemon analyzes the role of theatricality and theatrical tropes in Romani life and the everyday linguistics of social relations and of memory. Historically, the way Romani stage performance has been culturally framed and positioned in Russia has served to typecast Gypsies as "natural" performers, she explains. Thus, while theatrical and musical performance may at times empower Roma, more often it has reinforced and rationalized racial and social stereotypes, excluding them from many Soviet and Russian economic and political arenas. Performance, therefore, defines what it means to be Romani in Russia differently than it does elsewhere, Lemon shows. Considering formal details of language as well as broader cultural and social structures, she also discusses how racial categories relate to post-Soviet economic changes, how gender categories and Euro-Soviet notions of civility are connected, and how ontological distinctions between "stage art" and "real life" contribute to the making of social types. This complex study thus serves as a corrective to romantic views of Roma as detached from political forces.

Title: Between Two Fires: Gypsy Performance and Romani Memory from Pushkin to Post-Socialism

Between a Rock and a Hot Place: Why Fifty Is Not the New Thirty

Lives of the Lord Chancellors and Keepers of the Great Seal of England, From the Earliest Times Till the Reign of King George IV. 7 Volumes